A tour of the healthy human brain 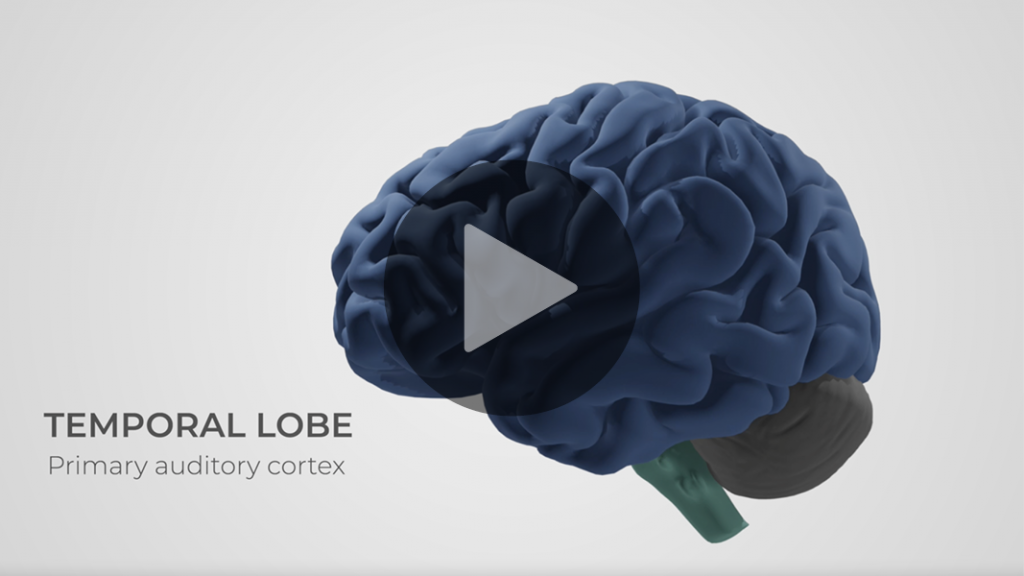 Read a transcript of this video:

The part of the brain primarily affected by dementia is the cerebral cortex, the brain’s outermost layer.

It is only a few millimetres thick and is divided into the left and right hemisphere.

The left hemisphere tends to be thought of as our ‘computer’ brain, a centre of logic and facts, while the right hemisphere handles emotions, memories and creative abilities.

Most dementias affect the left hemisphere first, so skills associated with the right hemisphere are retained for longer.

Let’s begin our whistle-stop tour at the back of the cortex with the occipital lobe. This works in tandem with the eye to help us interpret what we see. It helps us judge distance, speed and depth, and controls our field of vision.

Next to the occipital lobe is the parietal lobe. This plays a role in developing motor skills for everyday tasks such as washing and dressing, eating and drinking but also for reading, writing and calculation. The parietal lobe also interprets sensation such as touch, temperature and pain.

Next is the temporal lobe, which sits next to the ear and is home to the primary auditory cortex. This is where the brain makes sense of sounds. The temporal lobe is heavily involved in understanding language and is where we store knowledge about objects – for example understanding what a fork is and how it’s used.

A small structure called the hippocampus also sits deep in the temporal lobe, just on the edge of the cortex. This is involved in memory, especially for recalling new information.

At the front of the cortex is the frontal lobe which deals with cognitive skills such as planning, organising and problem-solving. It also has a role in controlling our impulses and social behaviour. It stops us saying out loud what we may be thinking, as well as helping us to understand situations from someone else’s point of view.

Beneath the cortex lies the limbic system, a set of structures that deal with emotions and memory. The amygdala is part of the limbic system; it is designed to scan and respond to threats. The limbic system remains highly active for a person with dementia and so we often see a ‘fight or flight response’ in reaction to fearful or stressful situations – particularly if the frontal lobe is struggling to cope.

By understanding how a brain works, and how it is affected by dementia, you can start to make sense of some of the challenges a person with dementia might experience. Dementia Carers Count has many more resources to help you understand the brain and how dementia affects it in the Virtual Carers Centre.

https://dementiacarers.org.uk/vcc/being-a-carer/benefits/carers-credit/
https://dementiacarers.org.uk/vcc/everyday-challenges/promoting-engagement/
6888
A tour of the healthy human brain | Dementia Carers Count
1
6888
The healthy brain
Watch
In this video we look at the main functions of different parts of the brain, and how they can be affected by dementia
50%
50%
category,post_tag,post_format,content_type
Dementia
The brain
Video