What is stress and distress?

Understanding stress and what can cause it is a useful skill for carers to have, and can help you to manage stress better

As a person’s dementia progresses there are many factors associated with the illness that can increase the likelihood of stress that may trigger distress.

The iceberg metaphor has been used in many fields of behavioural science over the years, and in the 2007 it was used by psychologist Ian James to illustrate the underlying and interrelated factors that contribute to the expression of stress and distress in dementia.

When we observe a person with dementia’s stress behaviours (those visible above the waterline), we need to identify what may be triggering that behaviour and address the underlying cause (those factors underneath the waterline that can be hard to define).

In order to deal with stress and distress we need to work together with the person, their carers and other professionals involved in their care, to identify underlying triggers and together develop strategies to deal with the cause in the hope to moderate or stop the distress behaviours

It’s important not to make assumptions such as; it’s just the dementia progressing, our assumptions can be wrong and often there can be more than one trigger factor involved in stress and distress. 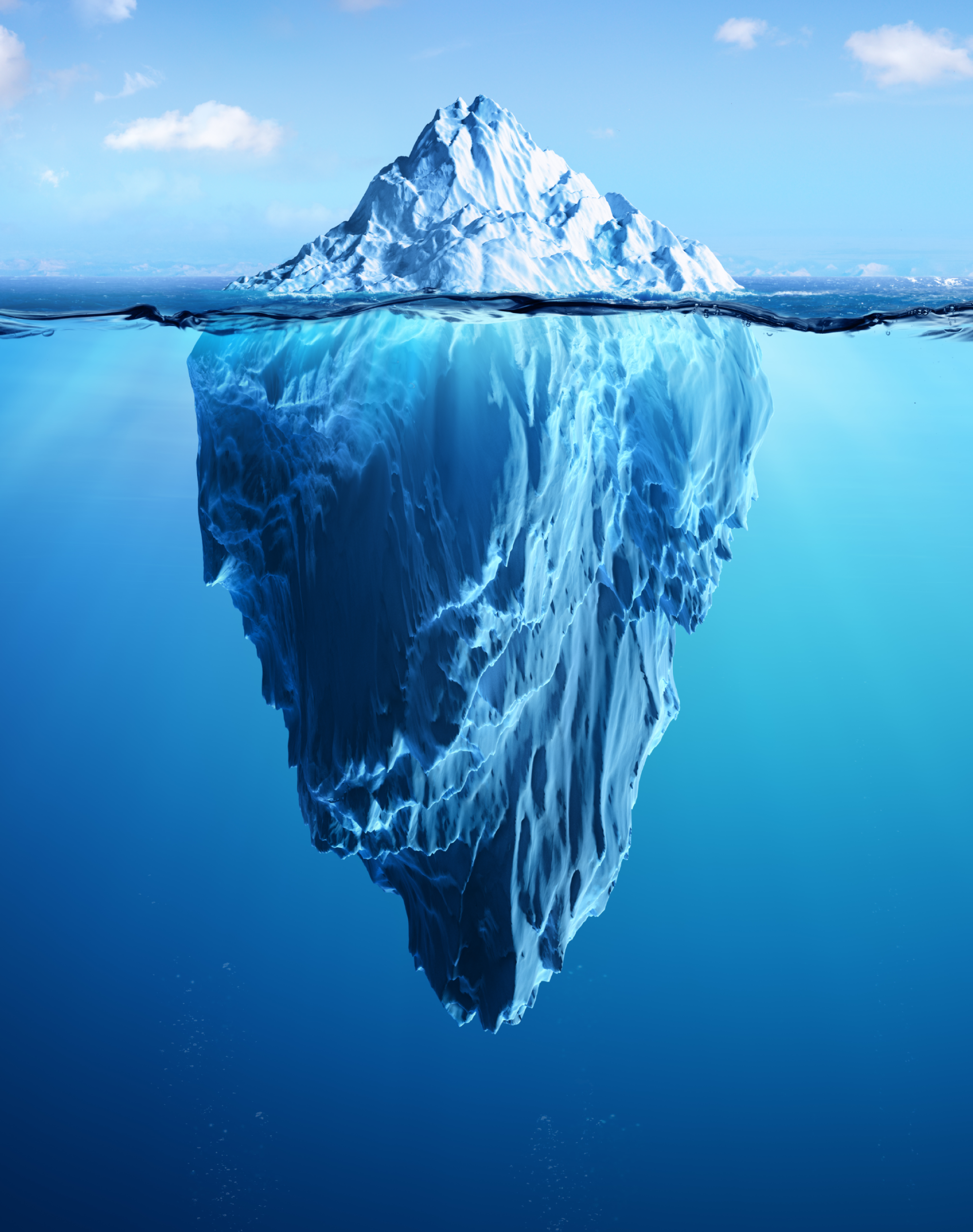 Stress and distress – what you see and hear

Stress and distress – the causes

To understand and manage stress, you need to look beneath the surface for the source

We need to detect and determine individual factors encompassed beneath the iceberg and how they interact and are influenced by the external factors such as social or environmental changes.

Some examples of these  are:

Drug related issues – The person may have started a new medication, or had medication increased and be experiencing side effects or it may be interacting with other medications prescribed. They may have had medication reduced or stopped and this may be having an adverse effect causing particular behaviours.

Mental Health Status – The person with dementia may have developed anxiety or their anxiety has increased due to being given the diagnosis of dementia or are struggling to cope with changes in their functioning/abilities. Depression is very common among people with dementia, especially during the early and middle stages. They may be experiencing psychotic symptoms (seeing/hearing/feeling things) due to the type of dementia they have or may have a psychotic depression.

Perceptions – All the senses can be altered by dementia, sight, hearing, touch, smell, taste also the perception of pain. Pain is often found to be a trigger and if pain is being experienced by a person with dementia and they are unable to communicate this, then it will go untreated, leading to high levels of stress and distress.

Personality – People will have particular personality traits prior to their dementia and there is evidence that lifelong personality traits persist even after neurological damage has occurred and can become more pronounced as the dementia progresses. If they have been a person who liked to make all the decisions and control their environment, and when they are told they are no longer able to do something that they believe they should, then they may challenge this and their behaviour may change as a response.

In Frontal Lobe dementias personality and behaviour changes are hallmarks of this type of dementia and present in the very early stages.  The person may act very differently than they used to, saying things or doing things that are rude and offensive, completely at odds with how they would previously have acted.

Physical Difficulties – Mobility: The person may become frustrated due to limited mobility and depending on others. Incontinence: They may be embarrassed and refuse help and support to manage their incontinence. Co-morbidity and frailty: They may have multiple age related conditions and advancing frailty leading to complex needs and support but not recognise this

Cognitive/neurological changes – Cognitive changes will affect how they may see the world, what they are hearing and how they comprehend and process information, they may have problems with orientation, finding their way around, sensory loss and their behaviour and personality may change

Metabolic Changes – Aging increases the risk of diseases such as type 2 diabetes, stroke, and hypertension. Which can in turn cause symptoms that may affect a person’s appetite, energy levels, and they’re mood, making them more irritable and less tolerant of frustrations

Environmental – Orientation: They may no longer understand familiar places, be able to navigate the layout of a place or understand signage. Personal Objects: Do they have their own things around them to make them feel safe and secure, giving them a sense of familiarity? Heating & Lighting: They may be too hot, or too cold as the body’s temperature regulation can be affected in dementia. The environment may be too bright or too dark causing issue with their interpretation of things such as floor surface, shadows and reflections.

We have sessions specifically focussed on the challenges in control, planning, reasoning, and behaviours which carers find challenging. Our courses have been designed with the emotional impact of caring for someone with these challenges in mind. Courses on this topic can be accessed either face to face or online, depending on which is most suitable for you. If you are unsure, please talk to us by phone or email and we can help you to decide what type of resource is best for you.

Find out more about our courses
What is stress and distress? | Dementia Carers Count