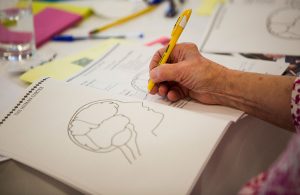 A glossary of terms used in our literature and on our courses.

A
Alzheimer: This is a the most common type of dementia in the UK. It takes its name from a German Psychiatrist, Alois Alzheimer was born in Germany, in 1864 and first described the condition.

B
Biography: Biography is sometimes also called life story or life history and relates to the detail of a person’s life, what has happened to them, who the significant people and experiences have been.

C
Carer: A person who helps and supports a friend or family member.

Cerebellum: The lower part of the brain that is responsible for human movement, co-ordination, motor control and sensory perception.

Coach/Coaching: Coaching can be provided individually or in groups with the aim of building on what a person knows and what they can already do and exploring different or new ways of approaching or responding to situations.

Cognitive: To do with mental processes including thinking, planning, remembering and problem-solving.

Co-production: When something is developed jointly with others. Our courses have been co-produced by our trainers and family carers of people living with dementia.

Cortex: The outer layer of the brain. It is composed of folded grey matter and is the most common part of the brain to be affected by dementia.

Counselling: A type of talking therapy which gives a person the opportunity to talk about their problems and feelings in a confidential setting.

Delusion: A delusion is a mistaken belief that is held with strong conviction even in the presence of evidence to the contrary.

Dementia: A syndrome – usually of a chronic or progressive nature – in which there is deterioration in memory, thinking, behaviour and the ability to perform everyday activities (World Health Organisation, 2019).

Depression: Low mood which lasts a long time and affects everyday life. It is different from feeling down or sad.

Diaphragm: A muscle that extends across the bottom of the lungs. The diaphragm plays an important role in how we breath.

Early onset: Dementia diagnosed at an earlier age usually considered to be under the age of 65. ‘Early onset’ is also often called ‘young onset’.

Early stages: The early stages of dementia are when initial cognitive changes begin to take place for a person. Changes may be small, but they are enough to affect the person’s daily life.

Facilitator: A member of the DCC team who will assist in the smooth running of the listening and problem-solving groups in which carers participate during our courses.

Fight or Flight Response: A primitive response to a threat or danger. The response may be physical (such as fast heart rate, sweating) or psychological (such as feeling afraid or out of control) or a combination of both.

Frontal lobe: The area of the cortex situated just behind the forehead which controls our ability for planning, controlling and judging.

Frontotemporal dementia: A type of dementia which has a set of symptoms associated with changes to the frontal and temporal lobes of the brain.

Grief: A response to loss commonly the death of a significant other person. Grief can also be experienced following the loss of other things such as material possessions, independence, a way of living.

Hallucinations: An experience of hearing, seeing, feeling, smelling, or tasting something that is not real.

Hippocampus: The region of the brain that is associated primarily with memory. When we receive new information or learning it is saved here in the first instance.

Judgement: An opinion or conclusion.

Lewy body dementia: A common type of dementia, named after the German Neurologist, Friedrich Heinrich Lewy (January 28, 1885 – October 5, 1950). He was the first to discover abnormal proteins in the brains of some people with dementia.

Listening groups: These are used on our courses and help us to have structured discussions after some of the main sessions. The listening groups create a place for participants to explore how things are for them and gain support.

Mental capacity: The ability to make independent decisions. Decisions might be about simple everyday preferences or about serious matters to do with where to live or whether to consent to certain medical treatments.

The Mental Capacity Act (MCA) 2005: A framework which is applied in the care, treatment and support of people aged 16 and over living in England and Wales who are unable to make all or some decisions for themselves.

Memory: The act of retaining information and retrieving it when needed.

Mentoring: Help and guidance provided by a person with experience and knowledge in relation to e a particular skill that you want to improve.

Mindfulness: A process of thinking in the here and now – being present with your thoughts.

Mild cognitive impairment (MCI): a slight but noticeable and measurable decline in cognitive abilities, including memory and thinking skills. The decline is more than the expected normal decline that comes with ageing, but the symptoms aren’t severe enough for a diagnosis of dementia.

Motor symptom: An abnormal function or feeling which is noticed by a person relating to movements of the body e.g. difficulty walking.

Occipital lobe: The section of cortex situated at the back of the brain mainly associated with visual skills.

Occupational Therapist: A health care professional who helps people who have mental, physical or social disabilities to engage with everyday tasks or occupations more independently and with confidence.

Paralysis: The loss of the ability to move.

Parietal lobe: The section of cortex situated at the top of the head, towards the back mainly associated with body management, spatial awareness and sensory information.

Peer support: Two or more people supporting each other by sharing their experiences.

Perception: The way in which something is understood or interpreted.

Perseveration: The repetition of a particular response or behaviour.

Pick’s disease: The original term for a type of dementia which is now known as Frontotemporal dementia. First identified by a Czech psychiatrist Arnold Pick (20 July 1851 – 4 April 1924).

Pre-diagnosis: The period of time before a diagnosis is made during which process of undertaking tests and assessments is often undertaken.

Problem-solving groups: These groups are used on our courses and are based on the principles of coaching and aim to develop problem-solving skills regarding specific topics selected by carers.

Reasoning: The process of using your mind to consider something carefully.

Resilience: Ways that help us to cope with stress and adversity in life.

Royal Surgical Aid Society (RSAS): A charity established in 1862 and is the registered name of Dementia Carers Count.

Safeguarding: Making sure that a person receives the support which is needed to keep them or somebody close to them physically, mentally and emotionally safe.

Sensory: To do with the senses (hearing, sight, touch, etc).

Self-care: Actions you take to protect your own health and well-being.

Self-esteem: An attitude towards your own self worth.

Speech & Language Therapist: A health care professional who provides assessment and support for people who have difficulties with communication, or with eating, drinking and swallowing.

Stress: The body’s way of responding to any kind of demand or threat.

Stages of dementia: An attempt to describe the dementia journey in stages each of which bring different clusters of symptoms. Commonly, there are three stages referred to as early, middle and late. However this way of understanding dementia may be overly simplistic and imply that everybody with dementia has the same journey, the same symptoms and the same abilities depending upon which “stage” they are in. At DCC we see every person as unique.

Subcortex: The subcortex is the lower part of the brain that sits directly underneath the cerebral cortex and controls primitive human functions such as body temperature and emotional responses.

Temperament: Describes the genetic behavioural disposition that people are born with, which is relatively stable over time.

Temporal lobe: The section of cortex situated beneath the temples and mainly associated with processing information, speech and memory.

Trainer: The person who delivers the sessions on our courses.

Vascular: The system of vessels which circulates blood.

Well being: How much a person feels comfortable, safe and happy.

We use cookies to ensure that we give you the best experience on our website. If you continue to use this site we will assume that you are happy with it.AcceptPrivacy policy