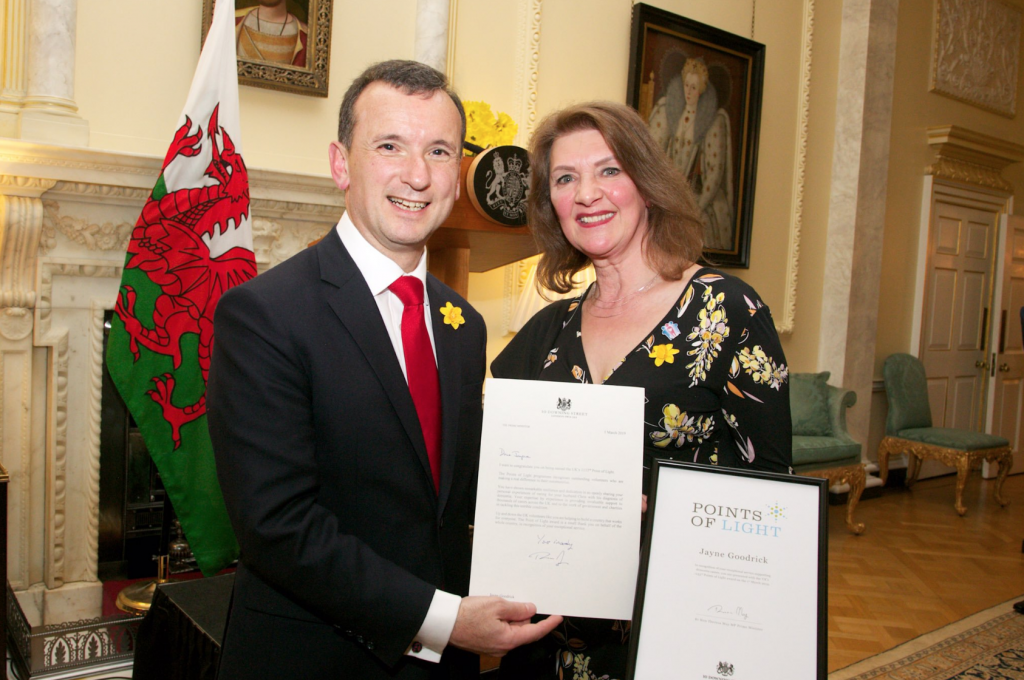 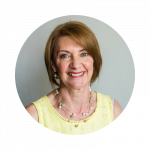 A guest blog by Jayne Goodrick

Jayne Goodrick is one of the UK’s leading advocates for people with dementia and their carers. She is involved in the Dementia oversight and implementation group for Wales Dementia Action Plan as well as being a valued member of our Carers Advisory Panel. Just before Christmas, Jayne received an intriguing letter…

I received a letter before Christmas saying congratulations, that I had been nominated for ‘A Points of Light Award’, and that they would be ‘looking into it’. I was at first bit uneasy, wondering if it was one of those spoof gifts, like those spoof Lotto scratch cards that say you have won £50,000, but there is nowhere to collect it. And then Christmas happened and I forgot about it.

On 22nd February, Chris received an email saying that having looked further into my work, the Prime Minister would like to recognise me as the UK’s 1133rd Points of Light recipient. I was going to be the award winner for Friday 1st March 2019. In addition, as there was to be an official reception at Downing Street to mark St David’s Day (Patron Saint of Wales), they would be delighted if we could both join them.

We were delighted, but were due to fly to Brussels that day!

We were taking part in discussions around early dialogues with PPI (no, not Payment Protection Insurance, but Public Patient Involvement). To produce evaluation tools to evidence that involving people like us, ordinary people who have valid opinions and experience on the where and hows research should be headed, is the best way of engaging with us as research participants, avoiding the pitfalls and enabling the whole study to have best outcomes – a topic very close to our hearts.

When you receive a diagnosis of dementia, it seems there is no hope – research gave us hope!

Alzheimer Europe had invited us to participate and contribute in these discussions.

They have a fantastic team, who are very experienced in all aspects of supporting people with dementia and their supporters, who immediately leapt into action to enable us to attend both the reception and the meeting – flights were changed from Manchester to London, but still maintaining our return to Manchester!

We are extremely fortunate to be able to work with some fantastic organisations (DCC being amongst the best, I might add).

We arrived at Downing Street, with a very peaceful and jolly demonstration outside the gates, and we went through what was reminiscent of an airport security entrance.

And then we were through.

Photos outside ‘the door’ (in case we weren’t allowed after!), and in.

Mobile phones had to be left in pigeon holes at the reception hall, to be collected on exit, no photos allowed.

We were then ushered along a corridor, where we passed Jeremy Hunt (who is taller in real life than on tv) and upstairs – the stairs with portraits of every Prime Minister of Britain since the first, Robert Walpole.

I think we ended up on the second floor, and into a reception room which was showcasing cheeses, wines, gins(!), all of which were produced in Wales. It was after all a Welsh reception.

There was a harpist playing in an adjoining room, and he was a he. I had never seen or heard a male harpist before.

There were waiters with trays of wine or orange juice and water. And canapés provided by the Celtic Manor Resort, THE high-end hotel in Cardiff, where Obama stayed when there was a World summit.

And I am very pleased to say that there weren’t copious amounts of drinks, so someone had an eye to the budget.

It became quite loud and busy, and Chris found himself in another room where there were chairs in theatre style and a stage.

Portraits on the wall of no idea who.

And some doors that appeared to lead into the wall?

Chris being Chris, tried one, and it opened…..he had found a cupboard, with one to match opposite.

We were then found by the Points of Light contact with whom we had been emailing, he invited us downstairs to meet some people – if we liked.

We said yes of course.

Back down the (lots of) stairs, along another very different corridor, and into a small, flagged courtyard, with cafe style tables and heaters, where we joined Josh, recipient number 1131, also from Wales, recognised for his work around Cystic Fibrosis.

We then had quite a deep conversation with The PM’s health advisor and her speechwriter.

They were astounded by the similarities in what Josh and I were telling them, around stigma, ignorance, support, resilience, lack of knowledge of the two disparate conditions.

We both took advantage to educate those closest to the seat of power in the hope that it would make a difference and made it quite clear that Dementia Carers really do count!

And then we were all called upstairs where PM TM was giving a short speech.

I admit I was having shoe-anxiety about my less than sexy, plain, sensible London-traversing shoes.

No need, she was in the farther room and I could only see her by her height!

She was surprisingly engaging. And then gone.

There was a choir, speeches, and then we were presented with the certificate by Rt Hon Alun Cairns MP, Secretary of State for Wales.

And that was it. All done.

Walking back down the formal stairs I was asking about the building, the portraits, and then spoke to a gentleman who had been in Downing Street since Margaret Thatcher’s days, who informed me very knowledgeably about the history – it was two houses, joined together by the corridors we had been walking.

The house was offered to Robert Walpole for himself, but he refused.

Eventually, he accepted the building on behalf of the Nation as the residence of the incumbent Prime Minister. The gift came from a Mr. Downing.

On the 1st March 2019, Jayne received the Points of Light Award in acknowledgment of her work as one of the UK’s leading advocates for people living with dementia and their carers. The PM, Theresa May said of Jayne:

‘You have shown remarkable resilience and dedication in so openly sharing your personal experiences of caring for your husband Chris with his diagnosis of dementia. Your expertise by experience is providing invaluable support to thousands of carers across the UK and to the work of government and charities in tackling this terrible condition.’ 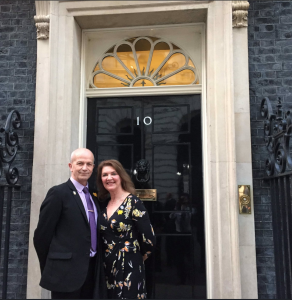