A Juggling Act: Working Whilst Caring for a Family Member with Dementia

If you read the news last week you may have come across headlines such as “Carers quitting jobs from pressure” and “600 people a day quit jobs to care for elderly relatives.” These were in response to new research released by Carers UK which showed that more people are caring than previously thought and raised important implications for employers.

“Better workplace support for people juggling paid work with caring for a loved one is becoming an increasingly important issue… With 15% of the population now working and caring, there is a real social and economic imperative for UK businesses to adopt carer friendly workplaces.”

This is a topic close to my heart, and one that I’m glad is being highlighted in the media. Focusing specifically on dementia carers, I chose to explore the challenging experience of juggling paid work with care during my Organisational Psychology Masters. I thought this would be the perfect opportunity to share my findings.

The word dementia means “decline in mental abilities.” There are several different types of dementia with the commonest being Alzheimer’s Disease and Vascular Dementia. Each person living with dementia will experience different symptoms at different times, but typically the ability to think, remember, and reason can be affected by dementia. One person develops dementia every three minutes, and there are approximately 850,000 people in the UK currently living with this condition. Due to an ‘ageing society’, this figure is predicted to rise to over 2 million by 2051. No wonder dementia has been referred to as “health’s ticking time bomb”.

The ripple effect of dementia is also huge; 700,000 people in the UK are currently acting as primary, unpaid carers. The majority of these are family members, and many have to juggle this alongside full-time employment. Research has consistently shown that this juggling act can be physically and emotionally demanding. Carers are at a high risk of experiencing a variety of negative personal outcomes such as anxiety, depression, and heart disease and work outcomes, such as absenteeism, a reduction in work hours, and even termination of employment.

What did I do?

With the help of Dementia Carers Count, seven carers came forward to take part in my study. They were all women supporting either a parent or a spouse who had juggled their caring role alongside paid employment. I talked in depth with each carer about their experience of working whilst caring and looked for common themes in the interviews.

What did I find?

Finding out that their family member had dementia sparked an emotional rollercoaster for the carers I interviewed. At home they reported feeling sad, helpless, isolated, and afraid. Their work subsequently became harder as they were physically and emotionally exhausted, yet it also became a meaningful and important part of their lives to retain as it provided them with a sense of identity, value, and an escape from the stress of caring.

“It was fab, because the minute I got on that motorway, I was in a different world, and that has gone, I left all that behind. It was an escapism.”

The need to keep work as a “safe haven” or to keep up appearances as a “super employee” (who is strong, productive, immune to any personal adversity being experienced and performing at levels equivalent to those prior to becoming a carer) often led carers to keep their caring duties a secret from their employer. Interestingly, “strength” at work was associated with being emotionally closed, and one carer even saw strength and masculinity as synonymous. These views are reflective of the beliefs which are valued within our individualistic society (such as individual goals, privacy, competition, and self-reliance).

“My boss said to me, you’ve got more balls than any of the men in here!”

The carers in my study told me that when they did tell their employer (if they did at all), they focused on asking for practical support, such as flexible working, as opposed to emotional support, as they believed this would put them at less risk of being viewed as weak. However, it was how an organisation’s flexible work policies were implemented, as opposed to the policies themselves, that influenced their experience of practical support within the workplace.

“Other things that have frustrated me are just doing compressed hours so having extra days off, but then being expected to change my days off to fit in with things within the team.”

They also told me that if they did need or want emotional support at work, they would navigate the workplace to find pockets of privacy where they felt safe from negative judgements and consequences, such as in private, or the presence of confidential councillors, friends or other carers.

These findings suggest that:

What can employers do to help support working carers?

EDUCATION: Educate staff around the nature of dementia and the demands of caring to help reduce stigma and promote a supportive organisational culture in which employees feel safe asking for support.

The House of Commons Work and Pensions Committee (2018) recommends that the current flexible working regulations should be amended to ensure the right to request flexible working exists from the first day of employment, rather than after six months. The results of this study absolutely support this; flexible working helps support those in a caring role, and employees may have to adopt this role without notice and at any point during their working lives.

CONFIDENTIAL SUPPORT: Offer confidential support within the workplace so employees feel they have somewhere safe to open up in emotionally at work, without judgement, if they want or need to.

DEVELOP CARER NETWORKS: These can help employees access peer support, managers access support advice and resources, and in turn have been shown to increase the productivity of working carers and reduce the amount of stress and sick related leave they have had to take.

ADOPT A FLEXIBLE APPROACH: Fundamentally, each employee and caring situation is unique and may be influenced by a multitude of motivations, drives, and fears, which may also change over time. Employers who understand this and adopt a flexible approach to employee support, as opposed to a “one size fits all” philosophy, will inevitably benefit more in the longer term by retaining a valued, satisfied, and productive workforce.

You can also listen to me talking about my research with fellow psychologist Ross McIntosh on his People Soup podcast here.

A version of this blog first appeared on Lauren’s blog Nine to Thrive. 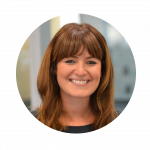 Lauren completed her undergraduate degree at University of Southampton where she received a BSc First Class Honours in Psychology. Following this, an interest in understanding consumer behaviour led her down her first career path in marketing. After six years, she decided to complete an MSc in Organisational Psychology at City, University of London in order to contribute towards healthy and high-performing work environments. Her dissertation research; A Juggling Act: Exploring the Lived Experience of Working Whilst Caring for a Family Member with Dementia Through Interpretative Phenomenological Analysis received the Association for Business Psychology student award for academic excellence, which acknowledges a valuable contribution to research and theory in the industry of psychology and consultancy. She is currently working at Daggerwing, a behaviour change consultancy.

If you want to ensure you are doing the best you can to support those in your workforce caring someone with dementia, we can assist you.

Other ways to give