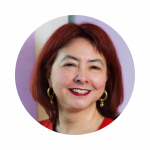 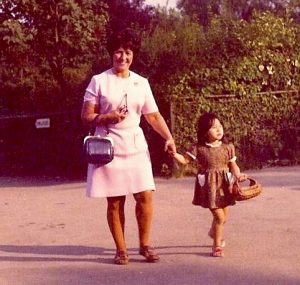 In those latter years in our own home, mum relied on me not as myself, as “Ming”, or even her daughter; she relied on me as her carer (though she never saw it as that) – the person who shopped, and cooked, and cleaned, did the washing, managed the builders, handled the boring finance and admin; the person who always came when she called, who generally kept her alive. She relied on me, just as I had relied on her as an unknowing helpless baby. That most primeval impulse: to reach out to the one who nurtures, cry out in the darkness for “Mummy!”

Rewind a decade or so, to when I worked on the TV series EastEnders. Each new episode of mine would delight her, after I’d become blasé. She’d call her friends, tell shop assistants, write proud notes in her diary: “Ming’s EastEnders today! Very good!!” A few years on, things had changed, although I didn’t understand it then.

One Saturday night, I was visiting for the weekend and had an episode of Casualty on. Mum showed no interest in the programme. In fact, she paid no attention – just carried on with her crossword, talked all through the dialogue, dozed off for a while. And when it was over, nothing. I was hurt, I have to confess. (OK, so it’s not Shakespeare, but come on, you’re my mum!) I too said nothing, though. What could I say? I told myself she was getting on and could be forgiven for dozing off; and it was just another episode of soap. Not big news any more…

A few months later: another episode of something. This time, I was in London. As the credits rolled, the phone rang. It was mum, as usual. But she didn’t mention the show. We chatted for some time, and finally I asked, “Did you see it then?” “See what?” I named the programme. “Oh, yes”, she said flatly. “Well, what did you think?” A long, blank pause. “Not much”, she said at last. “Stupid story, wasn’t it?”

By then, I realised she had forgotten that any of these programmes were anything to do with me, if she was aware of them at all. She didn’t mean to be unkind. But still it did hurt. Because I had to ask myself, are these her honest thoughts? Is this what she really thinks of my work, stripped of motherhood’s indulgence?

For her first two years in care, this encroaching “unknowingness” existed alongside our old relationship. She would not remember the context of my life or our relationship outside my visits, or the visits themselves once I’d gone. But in the bubble of those few hours over lunch and then tea, we were still mother and daughter – even if, in her eyes, I was the former and she the latter.

Christmas 2013 marked another watershed. Each week, I would find mum in the lounge, already seated at the table by the staff for me to join her for our lunch. Her mobility now greatly impaired, she had acceded to a wheelchair in recent weeks, so I was doubly surprised to meet her walking (stick-less!) toward me down the corridor from the lounge. I went to take her arm, and instinctively she recoiled, her face aghast with mistrust. “What’s the matter?”, I asked. But as I said it, I knew. “It’s me”, I said. “I’m Ming.” “Ming?”, she said, bewildered. “Oh, Ming…” It did come back, but I knew: out of the familiar context of the lounge, I could have been anyone.

I hugged her to me; she hugged me back with skeleton arms. “Don’t forget me”, I pleaded – though I knew I shouldn’t, it wasn’t a promise she could give. “Please, don’t forget me!” “How could I forget you?”, she said. “You’re my Ming. You’re my little girl.”

So where are we now? What am I to her? The harsh truth is probably nothing. She has not just forgotten me as the person I am today – she has no memory of the young woman I was, the teenager, the little girl, the baby in her arms. She does not believe she ever had a daughter.

Yet dementia is not a one-way street; it has countless meandering byways. Up to a couple of years ago, mum might greet me with pleasure on a good day and say I was “a lovely girl”, regardless of who I was. On a bad day, I’d be met by antagonism or just a blank. Sometimes she’d still call me by name, as if I’d just stepped out for a moment and we could pick up where we left off. But there was no longer any root to that knowledge; it was no more than a reflex – and now even that much has gone. Her eyesight declining, she barely registers my presence at all.

Her speech too, once so animated, is now eroding, along with the context that had long preceded it. Over the years, I had grown to accept that attempts at conversation must be on her terms, referencing her life before I was born. Now even those memories of her youth, the stories she told me about herself, are remembered only by me. What she yearns for most are her parents – and I can’t give her that.

So I put on a CD; TV has long since become too confusing. She still enjoys music, though not necessarily the same kind as before. I bring flowers, feed her fruit and cake, make her a cup of coffee; she used to drink tea like me, but so many tastes have changed…

As dementia shrinks down your world, small pleasures become more precious. Very occasionally in recent years, I have been able to wheel mum down to the garden in fine weather. I treasure those rare occasions when she can still enjoy the breeze, the birds, the warmth of sun on her face. I enjoy them too. But I can’t say we do it together. Side by side we are separate now. I miss the light of connection in her eyes. 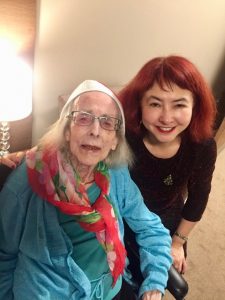 Read the final chapter of ‘An Act of Remembrance’ here.

Being kind to yourself when you’re caring for others

Spotlight on the enriched model

Spotlight on Music and Dementia

28 April 2021
We use cookies to ensure that we give you the best experience on our website. If you continue to use this site we will assume that you are happy with it.AcceptPrivacy policy